June 28, 2018
There could be worse inspirations for a pianist than Vladimir Horowitz. As the pianist Angelo Villani prepares for his first London recital in five years, he's written us a guest post about how the legendary Russian has lit the way to an approach that respects the score and composer while also finding a spontaneity that recreates the music anew in every performance. Do come and hear him play Chopin, Mozart, Bach and, of course, a little Liszt - actually, quite a lot - at the Royal Overseas League next week, 5 July. JD
Angelo Villani writes:
This July will be my first public recital in London for five years, so it’s an understatement to say I am excited. In the past, my repertoire has been principally centred around Liszt, as well as my own transcriptions, but for this next concert, alongside Chopin, I will be playing a smattering of Bach and Mozart for the very first time. My supporters are curious as to how I plan to approach these composers.
Since my teens, I have listened to great pianists, like Horowitz, who came to Mozart late in his life. He didn’t play a huge amount of Mozart, but he played him magnificently. Horowitz came from an operatic perspective that was not wholly conventional, and it ties in with how I feel about finding nuances and a sense of colour, which forms its own boundaries and its own cohesion and wholeness. His playing is very inspired. And inspiring. It’s emotive and personal, and changes with every performance. That’s what I am looking for, too.
Like period dramas, music shows us something of that time, but they also hold a mirror up to ourselves, showing us the human condition. We will always be drawn to Shakespeare, for example, and this year is the 200thanniversary of Mary Shelley’s Frankenstein. They speak to us as we are essentially the same humans. The customs and manners have changed, which is what we see in these dramas. We see the way they behave is different, but what they feel inside, that humanity, really hasn’t changed a lot. People still search for love and truth.
For me, in whatever I play, it’s a question of expression. With Mozart I am not looking for any of that classical form of correctness. I believe that can be achieved, that sense of style, when one taps into what Wagner referred to as melos. Being in the moment. It’s very telling, and it’s derived from his ideas on conducting. Approaching all music, one has to find that sense of being in the moment and finding the right mood, and let that carry through. It creates its own structure and sense of scale and for me it’s very important to do that in an organic way, although it’s difficult to achieve. 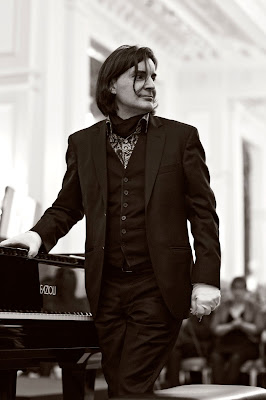 When we talk about classical music, we’re using an umbrella term for a lot of music that blossomed from the Renaissance up until present day. We have Baroque, Classical, Romantic, and then Moderns, Avant-garde and beyond, to what we have now. It’s good for people to understand that music can greatly reflect its epoch, but at the same time for the artist to be able to exploit the humane characteristics of the music, and to bring out its soulfulness and inherent humanity, they need to transcend barriers of classification. A lot of music can express these very personal human emotions that don’t necessarily come from the Romantic era. For me, when I played my transcription of Purcell’s Dido’s Lament, it opened a door for me to hear the Mozart D minor Fantasy and the Bach Siciliano in a completely different way because it reminded me, all of a sudden, that this music is heart-breaking and has its own pain, even though the way it is structured, its simplicity, is very much a Baroque style. It’s like a small etching or a pencil drawing, but with incredible and very poignant detail. So it drew me to these pieces in a way I wasn’t necessarily aware of when I was younger.
I’m sometimes asked what my motivation is for altering the score. I don’t do it that often, but it largely happens with Liszt, who was unique in this respect as his works were not always a finished product in the same sense as Chopin or Mozart, where everything was crystallized. He comes from a very Beethovenian line of thinking. Liszt tended to improvise and he kept re-writing the same pieces, not really knowing what would be the final result. His music relied a lot on the performer, who infused a good deal of their own personal take on it, especially the endings. So, I am always at ease with the idea: "Well, what would the composer do to take it beyond what they have arrived at?" Because music is a transitory experience, when a composer writes a piece down on paper, it’s still in transition until the performer brings it to life. I don’t think it’s a finite work, and we do have to respect that these great composers improvised. Chopin used to improvise a lot of the ornaments in his music, and his students said he never played his music in the same way twice. So even he changed things. They were ornaments, but it was essential for him to be able to change them. With Liszt, it was a malleability in his sense of texture and sound, which was more orchestral.
AV 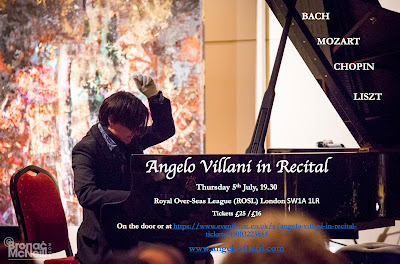 Popular posts from this blog

"Salome, dear, not in the fridge" 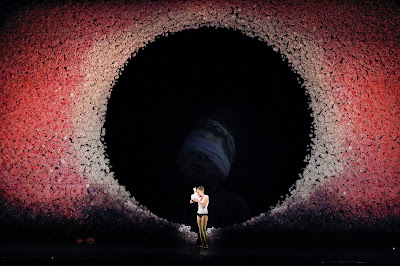 Allison Cook as Salome, with placcy bag Photo: Catherine Ashmore As I slunk homewards from ENO's opening night, a friend on Twitter kindly sent me the above headline. It's from an anthology of winning entries to competitions in The New Statesman, edited by Arthur Marshall, and cheered me up somewhat. Not that ENO's Salome would have needed to worry, because there wasn't much evidence of a severed head at all: just a placcy bag that for all we know might have contained a large cauliflower. One's cynical side considers it's probably cheaper than constructing a replica head of Jokanaan. I love good reinterpretations of operas. Like science fiction or magical realism (in which I've been learning a thing or two recently), they need to create consistent worlds, to make sense within those worlds and, if stretching disbelief, make us believe one big thing by getting the small things right. The denouement has to be stunning, too, to make everyone feel they have suspe
Read more

Last Night of the Proms: musical magic among the blue berets 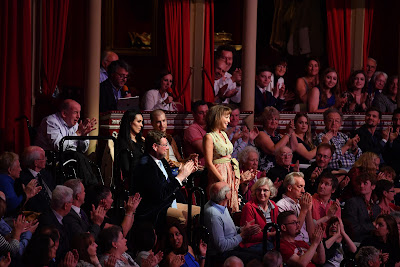 Roxanna Panufnik takes a bow. Photo: Chris Christodoulou/BBC Well, we needn't have worried. What usually happens at the Last Night of the Proms happened again: differences are put aside, all are welcomed in with flag of whatever hue, and there's one great big jamboree of a musical party, where we get to join in. A few years back (2013, I think, was the last time I was there) it struck me that what actually matters in those audience songs is not the content, but the fact that we're all there and singing together, and singing with the professionals and the orchestra and, in this case, Gerald Finley and Sir Andrew Davis. Nothing brings people together like singing. Goodness knows why, but it's true and you can feel it, palpably. It was a big night. Roxanna Panufnik's beautiful and very atmospheric new Proms commission, Songs of Darkness, Dreams of Light, had its world premiere; saxophonist Jess Gillam must surely have shot to superstardom, music poring from every cell;
Read more